The Giant Bagpipe Spider is indigenous to Scotland. It strongly resembles a set of bagpipes. This creature is extremely camera-shy and will scuttle for cover at the drop of a lens-cap; as a result, no photographs are known to exist. The picture below is an artist's impression of a specimen recently sighted in Ayrshire. 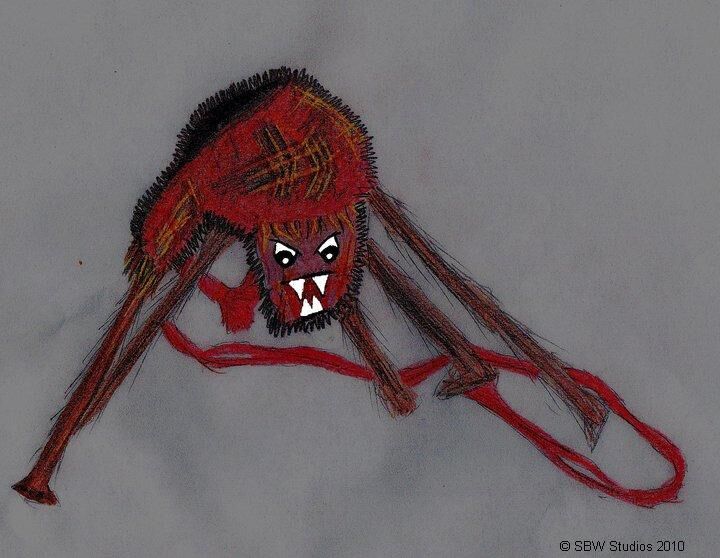 It is about the size of a small dog, has an extensible stomach, four legs; NOTE: they are technicaly NOT spiders due to them not having eight legs;(usually black) and often wears something vaguely resembling a kilt (no known species of spider has ever really got the hang of making these properly). Some specimens are also known to favour accentuating their appearance with the addition of a Tam O'Shanter.

It can be deadly. After one bite from it, people have been known to dance the Highland Fling until they drop dead. However, as with the the adder, the UK's only venomous snake, the spider's venom is not highly toxic and most victims will recover, as long as they are in a general state of good health and haven't recently consumed too many deep-fried Mars Bars.

This semi-arachnid's regular diet is (purportedly) fruit, vegetables and small animals such as squirrels, birds and hedgehogs. Apart from supplying protein, the latter is also reputed to be a good source of toothpicks. However, it is apparent that any port will do in a storm, and the vast majority of attacks on humans seem to happen around January 25th each year when other sources of nutrition are in short supply due to seasonal considerations. Other times and places to beware of are Hogmanay, the Edinburgh Festival and anywhere else that might have marching fife-and-drum bands: the spider is drawn to such venues as if by the strongest magnet imaginable.

The spider hunts its live prey by sneaking up on it and biting it. Once the prey stops dancing, it will either die or fall asleep, and then the Bagpipe Spider will fall to its gruesome feast (the sordid details of which cannot possibly be revealed on a family website).

The best-known antidote to the spider's bite is liberal application of a good single malt. Apart from this, however, there are several other cures:

Community content is available under CC-BY-SA unless otherwise noted.
Advertisement